Call in and see us at

Some professional images reproduced by kind permission of DE PHOTOS

Miss Joanne began dancing at the age of 3, as she is an only child, her mum thought that it would be a good way for her to meet other children. Little did she realise that over forty years later she would still be so heavily involved with dancing.

As a child Joanne attended a local dancing school were as well as gaining examination qualifications in Ballet, Modern and Tap, she spent many enjoyable hours taking part in shows and competitions.

When Joanne was 16, she went to a stage school in Lancashire, where she intended to study solely to be a dancing teacher. However during her first major examination at college, the examiner asked Joanne 'are you going in the Bluebells in Paris's dear?' The seed was sewn...............

Two years later, before completing all her examinations, but with her headmistresses blessing, Joanne sucessfully auditioned for the Bluebells. She took the opportunity, but promised to return to college in order to complete her teaching examinations, once she had retired from the Bluebells. A number of years later Joanne returned to college and completed her qualifications. A couple of months later,on October 6th 1992, Rhythms opened.

Joanne now holds teaching qualifications with both the IDTA, including Fellowship Ballet and the ISTD. She has an enhanced CRB check and holds a Chaperone's Licence with Kirklees Council. Joanne has attended courses on Child Protection, Child Care and First Aid. She is also a qualified Fitness Instructor and has experience as a children's fitness coach. Joanne is an experienced adjudicator at dance competitions and festivals. Miss Joanne is also an acredited Acrobatic Arts teacher. 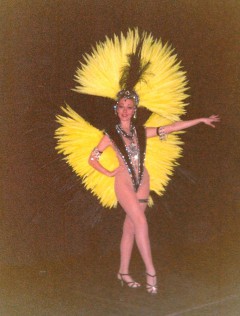 Miriam began dancing at Rhythms at the age of three, she graduated from Leeds Beckett University with a BA Honours Degree in Dance. Miriam has now attained IDTA teaching qualifications and is currently working to achieve further examination success. Miriam is delighted to be working as a teacher at Rhythms. Throughout her years at Rhythms Miriam has shown great loyaly and dedication to the school and I am sure that her ability, enthusiasm and fantastic talent will be of great benefit to everyone at Rhythms. Miss Miriam is also now an acredited Acrobatic Arts teacher. Unfortunately for us, at the moment Miss Miriam is currently working in Hong Kong, which is a fantastic opportunity.